Home > Septic Tank Services Blog > How Far Away from the Drain Field Should an Oak Tree Be Planted?

How Far Away from the Drain Field Should an Oak Tree Be Planted? 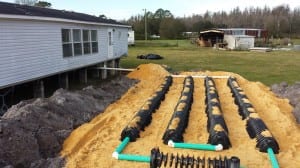 Any septic contractor will tell you that clogged systems are costing homeowners thousands of dollars every year in replacement or repair. Often, tree roots are responsible for a blockage. However, this situation can be prevented by planting certain species of trees a safe distance from the drain field and tank. It’s usually safe to plant oak trees in such areas because their root systems are less invasive and not as widespread as other species.

Oaks are among the few trees whose roots don’t pose much of a threat to underground plumbing, drain fields and septic systems. Nevertheless, there is evidence that contradicts this theory, since the roots of a mature oak can spread out as much as 90 feet or more from its base. The planting distance of 15 feet that is recommended for young trees with developing root systems doesn’t actually take into account in which direction the roots will develop. Therefore, the minimum suggested planting distance should equal the tree’s estimated height at maturity.

Be aware, however, that even if an oak tree is deemed to be a safe distance away from a drain field, there’s no certainty that the roots won’t seek out effluent, especially in areas where annual rainfall is low. The species of oak considered to be low threats to septic tank systems are bur oak and northern red oak.

If you suspect that tree roots are posing a threat to your drain field, contact us at Lee Kirk & Sons Septic in Lakeland, Florida.

Leave a Reply How Far Away from the Drain Field Should an Oak Tree Be Planted? Cancel reply